The Mayor of Dupont Street 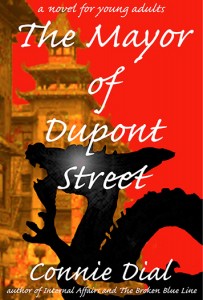 The Mayor of Dupont Street by Connie Dial

The story is set in 1901 San Francisco and opens with the discovery of a grave on Market Street containing three dead Chinese men. Twelve-year-old Amanda, whose father is the chief of detectives at the Battery Street police station, is fascinated by crime and criminals. She skips school with her little brother Peter to view the grave and begins an adventure that leads to the disappearance of Peter and a frightening excursion through the underworld of Chinatown. In the process, she discovers a shocking secret about the dead men that nearly destroys her family.

There are twenty-two original black and white illustrations by Patricia Milazzo in the book depicting San Francisco as it appeared in the early 1900’s. The clothes, Victorian mansions, Chinatown, and the streets of that city are represented in amazing detail.
Genre: Young adult mystery